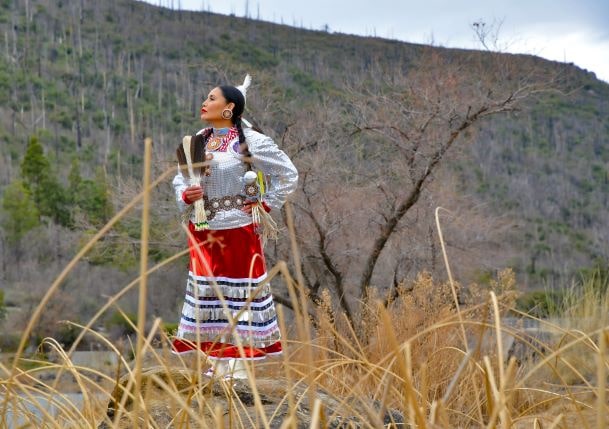 Rose Mcfadden is a leader of the Native American Women Warriors group, a community that seeks to aid Native American female veterans with recovery and in their transition out of the military. (Courtesy of James Skeet Photography, NAWW Volunteer Member, Navajo)

“Then it was my turn,” said Serna, who is from the Turtle Mountain Band of Chippewa Indians, based in North Dakota, and the Oneida Nation of Wisconsin.

She enlisted in the Navy as a hospital corpsman in 1996 and now works as the executive director of the American Indian Center of Chicago, a cultural and community resource that has served the city’s Native American community since 1953.

Native American women, like Serna, comprise a higher segment of the veteran population compared to other races, proportional to the size of their demographic group.

Women make up 11.3% of the Native American veteran population, which is a higher percentage than women in other demographic groups. For all other races, women only make up 9% of the veteran population, according to a 2020 report from the Department of Veterans Affairs that used data collected in 2017.

Serna attributed Native American participation in the military to their role as protectors.

“I think when you get down to the fundamental, traditional values of who we are as Native people, we’re water protectors, we’re land protectors,” Serna said. “We’re protecting what’s normally and what was ours, and has always been ours.”

According to Angela Pratt, 46, speaker of the Osage Nation Congress, many Native American women join the military because of their “warrior spirit.”

“I just think it goes back to our spirit and just having that feeling of wanting to make a difference … because that’s what our people teach us, to be better and do better,” said Pratt, who served as an Army specialist from 1996 to 1999.

But many face challenges accessing health care after exiting the military, including the distances to and from clinics, managing families, culturally competent health care and historical mistrust in the health care system. Despite these hurdles, Native American female veterans exhibit resiliency and continue to serve their communities and country.

After leaving the military, many Native female veterans struggle with transitioning back to civilian life, said Sonya Tetnowski, an Army veteran who now serves as CEO of the Indian Health Center of Santa Clara Valley.

One of the largest challenges facing Native female veterans is the distance it takes to reach health care services provided by the VA. This holds true for Natives living in urban areas, but especially for those living on reservations.

“The distance to travel is a huge thing just throughout Indian Country, period, for both male and female,” said Mary Culley, a 20-year Air Force veteran who is Seminole and Creek and enrolled with the Seminole Nation of Oklahoma. Culley currently works in the VA Office of Tribal Government Relations.

If treatment requires care from a specialist, commuting can be a multi-hour endeavor, as many VA clinics provide urgent care services but not specialized treatments, said Rose Mcfadden, an Army veteran and a member of the Navajo/Diné tribe.

While living on the Navajo reservation in Arizona, Mcfadden said she regularly traveled up to six hours one way to Phoenix to get treatment for a service-connected disability.

“Most of the time that higher level of care is going to have to be at one of the main VA facilities, and most of those are in the bigger cities,” she said.

Mcfadden and Pratt pointed to the balancing act many women have at home. Between childcare and work, health care frequently gets pushed aside.

“A lot of time, women don’t make time for themselves to even go to the doctor on a regular basis,” Pratt said.

Many older Native veterans don’t necessarily want to receive services from the VA due to a historical lack of trust in the medical system, Tetnowski said, adding, “There’s still some difficulty and trust there.”

Throughout U.S. history, many Native patients have been subject to discriminatory medical practices and an establishment that structurally prioritizes traditional Western medicine.

According to a Government Accountability Office report, between 1973 and 1976, Indian Health Service records show that over 3,000 Native women were sterilized without their consent.

This lack of trust has led many Native veterans to seek care that merges their cultural practices and traditional Western medicine, providing them with “culturally competent care.”

The Native community is not a monolith, and their traditional methods of healing are also not the same across various tribes and nations. However, finding culturally competent care remains a priority for many Natives.

In her role at the VA, Culley frequently looks at what services can be improved for Native female veterans, asking “What are we not doing that we need to be doing? What do we need to bring to the table for you?”

She added: “It’s interesting that for a lot of the female vets … it’s cultural.”

The VA is planning to expand an initiative established in 2020 — the Rural Native Veteran Health Care Navigator Program — that connects Native veterans with peers in their communities to help them find culturally competent care.

While veterans often use the VA for specialty medical services, Tetnowski said for “day to day … regular medical needs” Native veterans tend to prefer their local Native health clinic, where they feel a strong sense of community.

Tetnowski, who is the CEO of the Indian Health Center of Santa Clara Valley, said her clinic has a veteran advisory committee dedicated to meeting the needs of Native veterans.

Culley pointed toward work she is pursuing in Oklahoma, where she is connecting VA psychologists with tribal mental health in order to merge care for Native female veterans.

“They’re on board with that, it’s just now getting all the key players together to figure out how we’re going to map that out,” Culley explained.

Despite the many hurdles facing members of the community when seeking health care, Native female veterans say they continue to persevere.

“We’ve survived a lot of things over many generations. We’ve survived boarding schools, separation from our children, and the resiliency of our communities specifically is around survival,” Tetnowski said.