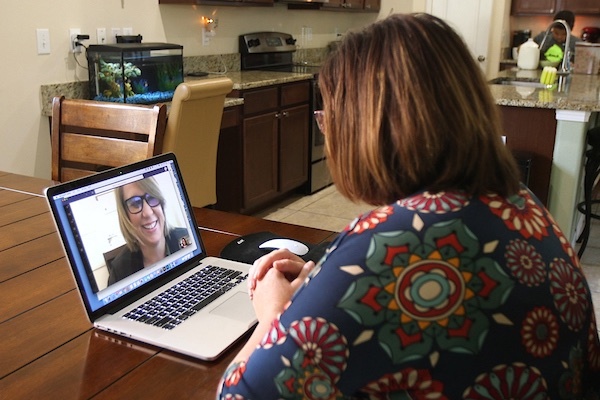 WASHINGTON — It got a lot easier for patients with opioid addiction to get their medication remotely during the pandemic — and now addiction doctors and telehealth companies are pushing Congress to make those flexibilities permanent.

Before Covid-19, patients had to see a doctor in person for prescriptions to help them with their addictions, like buprenorphine. Now, at least temporarily, they can get them via telehealth appointments.

Experts say loosening the rules helped eliminate longstanding barriers to addiction care, like a lack of transportation or a shortage of clinicians who prescribe medically assisted treatment, especially in rural communities. But the changes are temporary, tied to the state of “emergency” associated with the pandemic — and proponents want them made permanent.

“It saves lives, no question,” said Kaitlin Baston, the division head of addiction medicine at Cooper University Health Care in New Jersey. “That first visit is often the biggest barrier. If we can engage people in that first visit, and meet them right where they are, and then get them initiated in treatment, it just makes it that much easier and they might not even need to leave their homes.”

Congress has taken notice; Republicans and Democrats in both chambers have introduced bills aimed at preserving the flexibility, though none has yet gained traction.

“The idea of having to travel every day to pick up your medication is just another barrier set up,” said Rep. Donald Norcross (D-N.J.) of the loosening of prescribing rules. “It is time that we start treating [people with opioid use disorder] as you would your family, get them access to treatment and work with them just like you would any other disease.”

In December, Norcross introduced a bill to let local pharmacies distribute opioid treatments like methadone, which has long been available only at registered clinics, though rules for its use, too, have loosened during the coronavirus pandemic.

President Biden, too, has made it clear he wants to make addiction treatment more widely available. In his State of the Union address last week, he said it is “time to get rid of outdated rules that stop doctors from prescribing treatments” to opioid use disorder.

Critics of the bills say telehealth makes it more difficult for doctors to determine whether patients are misusing prescriptions. Some also argue that if it’s easier to get the drugs, patients might also sell them to others illegally or otherwise divert them outside their intended use. And there are questions, too, about reaching patients without access to smartphones or computers, and about privacy.

Still, support is widespread in research and medical communities that see the expansion of telehealth as an important development in the country’s efforts to combat an opioid epidemic that now kills more than 75,000 Americans a year.

And emerging research has found that prescribing these drugs via telemedicine isn’t worsening care outcomes. A February 2021 study of nearly 500 patients, most of whom took buprenorphine, found that telemedicine patients stayed in treatment and managed to abstain from opioid use at roughly the same rates as those treated in-person.

Another study, published in November 2021, found that even as telehealth-based treatment with methadone increased during the pandemic, misuse didn’t.

“Telemedicine is something we’ve all used and have always backed,” said Basmattee Boodram, a public health professor at the University of Illinois Chicago who has researched the opioid epidemic there since 2002. “It just took this pandemic to really show the people that make laws and provide funding that it really works.”

It’s also been a boon for telehealth companies that offer addiction treatment services, among other offerings in the mental health space.

“We meet people where they are at,” said Lisa McLaughlin, co-founder and co-CEO of Workit Health, which offers clinician- and counselor-led virtual programs and treatment options to people suffering from addiction through an app. “We just want to be in everyone’s pocket whenever they need help.”

Boulder Care CEO Stephanie Strong, whose app offers patients video visits and messaging with a team of addiction medicine specialists and people who have recovered from an addiction, said that the loosening of federal telehealth rules has allowed the company to help prescribe medication to thousands of opioid use disorder patients across the country.

“There are so many people with severe substance use disorders that are now accustomed to getting their medications over telehealth, and who are in serious danger if they aren’t able to get them,” Strong said.

Arielle Estes, who is in recovery and works as a peer recovery specialist at Boulder Care, said telehealth treatments for addiction are “a game-changer.”

“The changes to telehealth need to be put in place for the rest of our lives,” she said, “because this model of care is what’s going to keep people alive.”