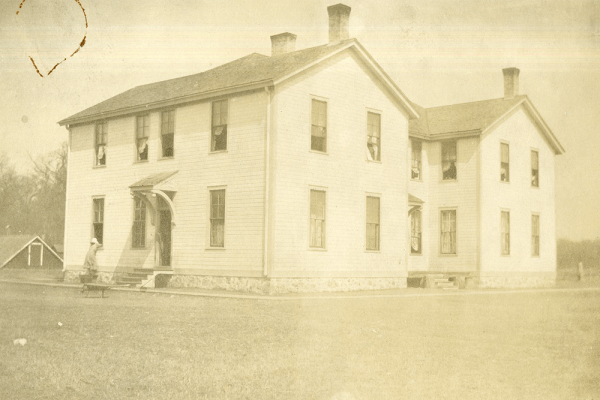 Cross Lake School on the Red Lake Reservation in Minnesota. (Photo by the Department of the Interior, Bureau of Indian Affairs Red Lake Agency via the National Archives)

WASHINGTON — As a child, Cathy Chavers, a member of the Bois Forte Band of Chippewa, never knew her family suffered in U.S. boarding schools. She only learned after her grandmother’s death that she was sent to Minnesota’s Vermilion Lake Indian School. Vermilion was one of hundreds of U.S. boarding schools designed to assimilate Native American children into white culture in the late 1800s and early 1900s.

“She never talked about it when she was alive,” Chavers, now the tribal chairwoman for Bois Forte, said. “That’s a deep, deep part of our history. If it doesn’t get told, it doesn’t exist.”

The U.S. government authorized and funded the schools, with many sponsored or operated by religious organizations. Children were separated from their families, languages, and cultures. Some faced physical and emotional abuse.

Across the nation, Catholic Church leaders are beginning to reckon with their institution’s role in operating Indigenous residential schools and the lasting consequences these schools left on Native American communities. One state seeing growing momentum to address this history is Minnesota, which had 15 boarding schools; Catholic groups operated at least eight of them.

Representatives from the Minnesota Catholic Conference are collaborating with tribal leaders to better understand the experiences of Native American children in Catholic-run boarding schools. Dioceses are looking into their archival records to identify past students and uncover more information about the schools. Jason Adkins, executive director of the state’s Catholic conference, declined to be interviewed for this story.

Bishop Andrew Cozzens of the Diocese of Crookston, Minn., said the effort began after the 2021 report of hundreds of unmarked graves around boarding school sites in Canada.

“I think we were all shocked by the revelations of the Canadian situation,” Cozzens said. “The bishops in the United States in general started to talk about our own history, especially with regard to boarding schools.”

Last November, the United States Conference of Catholic Bishops’ Subcommittee on Native American Affairs sent a letter to all U.S. bishops pushing church officials to cooperate with Native communities to act on alleged abuse at schools run by church entities.

Bishops from the Minnesota conference organized a first meeting with local tribal leaders in December to begin working toward reconciliation, Cozzens said.

He described the December meeting as a “significant amount of pain sharing” where tribal leaders shared stories of their family members and ancestors who attended boarding schools.

“[Forced assimilation] wasn’t just a church mindset,” Cozzens said. “It was the general mindset, but it was the wrong mindset, which was to not allow Native people to practice their culture.”

John Morrin, tribal councilman at Grand Portage Band of Lake Superior Chippewa, called the meeting a “historic moment.” Morrin, whose own parents were sent to a boarding school, said he had never seen this kind of conversation happen in Minnesota.

“It was one of the first times that tribal leaders were actually able to be heard in that type of way, facing this institution,” Morrin said.

While no further meetings are scheduled with the Minnesota Catholic Conference, Morrin said he walked away from the first gathering feeling hopeful about the work to come.

Over 40 percent of boarding schools nationwide were or are associated with the Catholic Church or one of various Protestant denominations, based on 2020 data from National Native Boarding School Healing Coalition, an organization addressing the trauma of the schools. The Catholic Church accounted for the largest number of all denominations, according to their analysis.

Linda LeGarde Grover, a professor emeritus of American Indian studies at the University of Minnesota Duluth and member of the Bois Forte Band of Ojibwe, said her family experienced life in boarding schools across several generations.

Due to the emphasis on assimilation, Grover said students received the equivalent of a sixth or seventh grade education by the time they completed the program at around age 16; due to inconsistent records on deaths, runaways, and accidents, Grover said it was unclear how many students actually finished the program.

The location and final resting place of the children who died while attending the schools remain a lingering question for Grover. While she feels uncertain about invasive measures to recover remains, she said tribes need more information. Cozzens said there is not currently evidence pointing to large number of unmarked graves in Minnesota.

“Native people do want to find out if, God forbid, there are unmarked graves and we’re happy to cooperate with whatever they want to do, but we don’t have any evidence of that,” Cozzens said.

As Chavers learns more about her own grandmother’s boarding school experience, she has struggled to recover the culture her family lost in that time. She has turned to her 90-year-old uncle for answers about her family’s past.

“I really want to learn about that because she never told [us],” Chavers said. “He’s the last survivor, so I need to find out that story.”

Confronting the past in the present

The weight of decades of abuse, family separation, and cultural loss continues to fall heavily on recent generations. Native Americans had some of the highest rates of mental health conditions, along with high rates of PTSD and alcohol dependence.

Some researchers believe historical trauma can contribute to these disparities, though they note the small sample size of research on Indigenous people. The result of this trauma and displacement Native people have faced has led to “dysfunction of the family,” according to Chavers.

“The mental health component, the substance use component, it all intertwines together,” Chavers said.

Chavers recently submitted a proposed memorandum of understanding between Minnesota’s Catholic Church leaders and 11 tribes. It asks the church for physical and electronic copies of any archival materials related to the boarding schools.

The memorandum also asks for “reasonable assistance” to the tribes in locating known and unknown remains on sites. The groups are working to create a committee that will facilitate communication on retrieval of records and information.

The entire effort may take years, according to Chavers.

In the recent work with the Minnesota dioceses, Chavers said they have been proactive in addressing community needs. However, Chavers is still troubled by the lack of accountability from the church’s highest official.

“The Pope has not recognized the atrocities that were done to Native American children,” Chavers said. “That’s one thing I think that the tribes are asking for, is that acknowledgement.”

Last year, Pope Francis expressed sorrow after the discovery of unmarked graves in Canada and announced his intentions to visit the country to further the reconciliation process, but has not apologized.

The Canadian Conference of Catholic Bishops apologized for their role in the residential school system last year. In 2018, the group wrote a letter saying the pope could not travel to Canada solely for the purpose of issuing an apology.

The search for greater understanding about what happened at Native American boarding schools has largely been left to researchers and survivors. The U.S. Bureau of Indian Affairs has not created a comprehensive index of records.

Rev. Gary Mills, who served in the Evangelical Lutheran Church in America before retiring, became familiar with the lack of records as the executive director of the Swift County Historical Society and Museum in Benson, Minn. Mills said much of the responsibility to find and report more information lies with the church.

Mills, who grew up about six miles from the site of the St. Paul Diocese Industrial School of Clontarf, a boarding school that operated from 1878 to 1898, said religious leaders could be more invested in addressing their past, including the Archdiocese of St. Paul and Minneapolis, which ran the Clontarf school. The archdiocese has not made records public despite requests; at least 14 Native American students died while attending the school.

“This is over 120 years ago that the school closed,” Mills said. “They need to let these records out. Who are they protecting? … I know that the church protects itself but, to me, this is a crime.”

Tom Halden, director of communications at the Archdiocese of Saint Paul and Minneapolis, declined to comment, pointing to Archbishop Bernard Hebda’s comments to the Catholic Spirit on the topic. According to the report, Archdiocese staff members began reviewing documents related to the Clontarf school in August 2021.

“We believe in confession”

Catholic Church leaders in several states have initiated their own efforts to address the impact of boarding schools, including in Oklahoma where the largest number of schools had existed.

Some work began before the revelation in Canada. According to a 2021 statement provided to Sojourners, the Saint Benedict’s Monastery in St. Joseph, Minn., has worked with the White Earth Nation and Tribal Historic Preservation Office for the past two years.

The monastery statement said it is now in the early stages of repatriation work regarding their role in running the Saint Benedicts’ Mission boarding school. This work involves sharing their archival materials with White Earth. In an email, monastery heritage coordinator Patricia Kennedy said the group is not giving interviews at this time as they “continue this tender work to seek truth and healing.”

While investigations are underway, the task ahead is challenging, Cozzens said. The church has kept “good records” on baptisms and other church activities, but other records are scattered among different parishes across the state, he said.

“We believe in confession,” Cozzens said. “You have to actually say what your sins are if you want to be forgiven, right? For us, it should be a part of our DNA, and it hasn’t always been.”

Chavers, meanwhile, urges the experiences of remaining boarding school survivors be recorded before it’s too late. She also shared her hope that churches nationwide will release their documents and work with tribes “so we know what happened to our kids.”

Grover said she wants Native people to remember their resilience.

“I want our children to know this history, but also to have continuing appreciation for the generations that went through this,” Grover said. “The fact they even continued to exist is a miraculous thing and a credit to their tenacity.”