MILWAUKEE — Duane “Dodge” Waubanascum, once an amateur boxer from the Oneida Nation who won two Golden Glove titles in the 1970s, stands in the back of a room watching a group of fellow Native American Elders participate in a boxing class.

He has been coming to the Work Out Low Fat Elders (WOLFE) Program at the Gerald L. Ignace Indian Health Center for three years. The weekly program is designed to educate Native American Elders — as well as some non-Native seniors — how to eat and exercise with their unique health needs in mind.

Alex Forsythe, a registered dietician who works with the WOLFE program, said nutrition is vital for supporting health through older age and the WOLFE dietitians try to incorporate traditional foods like beans, squash and buffalo into the meals. Exercise classes range from yoga and dancing to boxing.

“Not only does it help support your body, but it also helps support you know, your spirit, your mind, your body, and your spirit. And it just helps them connect to their traditional ways,” WOLFE director Diana Osberg said. 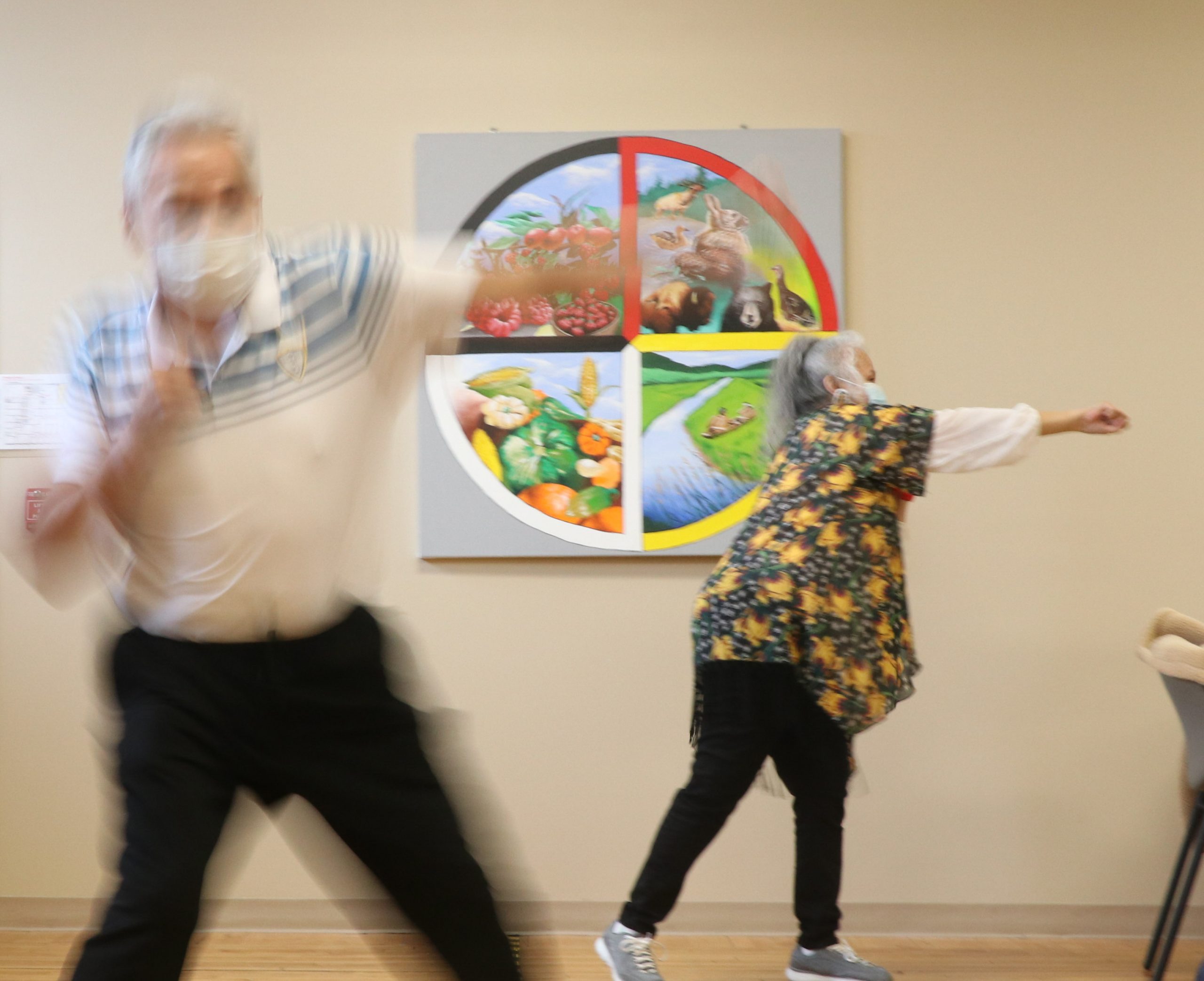 Duane Waubanascum, 64, follows along with the class Feb. 17, 2022 during the weekly Workout Low Fat Elders Program at the Gerald L. Ignace Indian Health Center. Waubanascum, a member of the Oneida Nation, was an ameture boxer in the1970s and won two Golden Gloves during his career. (Isabel Miller | Medill News Service)

According to Osberg, Native Americans have higher incidences of heart disease, hypertension and Type 2 diabetes, so she focuses on preventive care and proper management of disease by helping the Elders through exercising and healthy eating.

Native American and Alaskan Natives have a life expectancy of 5.5 years less than all other U.S. races, according to the Indian Health Service, and have a higher risk of death of liver disease and diabetes than other races.

“The meals are also diabetic friendly, meaning that they meet a certain carbohydrate requirement standard,” Forsythe said. “So that comes out to 60 grams or less per meal.”

“We’ll share about usually a 10 to 15-minute presentation on a nutrition topic that usually relates to the meal that we’re serving that day and just engages the Elders (to) kind of see what they already know about this topic,” Forsythe said.

Steve Pilot, a 62-year-old member of the Menominee Nation, said WOLFE was his introduction to nutrition education. He has had two heart attacks and now wants to keep healthy.

Pilot said the Clinic feels like “one big family.”

During the program, providers also offer blood pressure and blood glucose checks for the Elders, along with a traditional prayer and smudging led by a cultural adviser.

In addition to weekly exercise sessions,  WOLFE also gave the Elders pedometers earlier this year to track their steps. 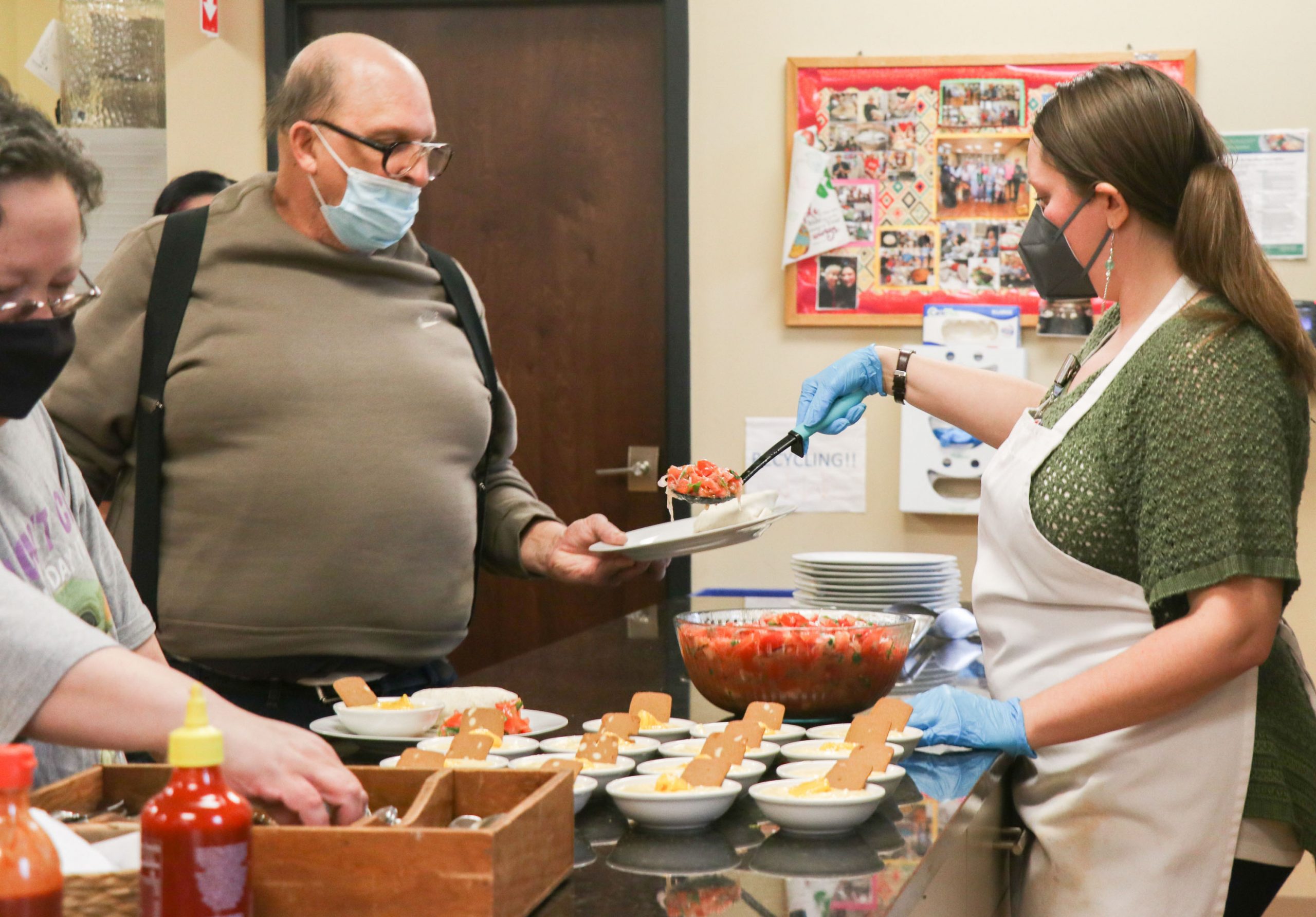 Dr. Lyle Ignace, head of the Gerald L. Ignace Indian Health Center, said that it is important that WOLFE recognize the diversity of Native peoples: there are 574 federally recognized tribes in the U.S., according to the Bureau of Indian Affairs.

Members of about 70 tribal nations receive care at the clinic, according to Ignace.

“Each recognized tribe has its own dialect, its own language, its own culture, as well as its own traditions,” Ignace said. “And so that’s where being understanding and recognizing how (to) approach someone in a cultural manner that’s appropriate to them (is important.)”

During the pandemic, providing WOLFE programming to Elders became more difficult with the suspension of in-person meetings, Ignace said. In the early months of the pandemic, when Elders couldn’t meet with the network of friends they had developed at the center, WOLFE made and delivered meals to the Elders’ homes to maintain their connection with WOLFE.

Rebecca Delgado, 63, a member of the Stockbridge Munsee Community, said she received meals from the program during the pandemic, but missed the social aspect. Now, Delgado is glad she’s able to come back to the center.

“I’m that type of person,” Delgado said.  “I need contacts, I need laughing, I need hugs…just sitting home not doing nothing, depression hits you really quick.”