The European Union will not give up until Putin gives in 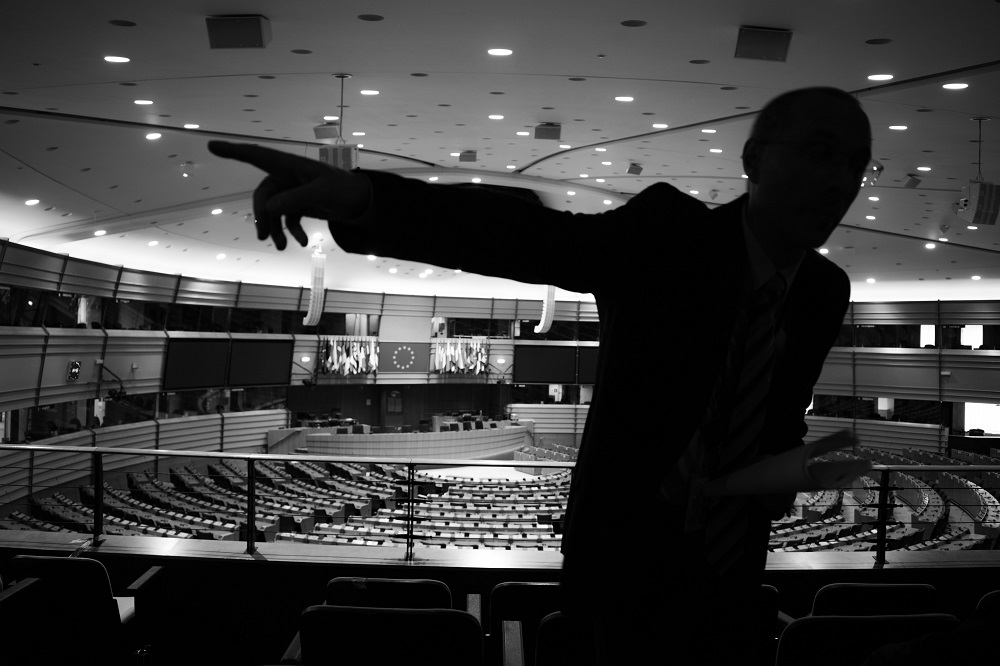 BRUSSELS – When asked about his prediction of how Russian President Vladimir Putin’s war on Ukraine would end, a top spokesman for the European Union recalled a sign held up at a demonstration in Germany: “Can we fast forward to the part when you kill yourself in the bunker?”

“If you’ve watched the movie ‘The Bunker’, you know how it ends,” said Peter Stano, the spokesman, referencing Adolf Hitler’s suicide.

“At this point, [Putin] is pushed into a corner,” Stano told a collection of U.S. journalism students in Brussels last week at the headquarters of the European External Action Service, the European Union’s diplomatic service. “He is losing at every front he can morally, legally, and even militarily on the battlefield; and as a person like him who lives in delusion and constant paranoia, he is very unpredictable.”

Stano said he does not yet consider Putin defeated and cannot predict what or when Putin would reach a breaking point. But one thing is absolutely clear to him. Regardless of how much time passes, the alliance between the United States and the European Union will prevail against Putin.

“We are here for the long haul because no one knows when he [Putin] will stop his madness,” Stano said. “But this is why we introduced so many sanctions, and this is why we are working so intensively also with the United States and other partners in isolating him and really limiting his access to the possibilities to finance the war.”

The European Union recently imposed its eighth round of sanctions against Russia. Both the European Union and the United States have asserted that Putin does not have the financial resources necessary to maintain his position.

James O’Brien, head of the Office of Sanctions Coordination in the U.S. Department of State, told the Senate Foreign Relations Committee on Ukraine on September 28, “There is significant evidence that sanctions are decreasing Russia’s access to the resources and technology it needs to pay, sustain, and deploy a modern military to fight a modern war. Over time, these impacts will increase.”

On September 23, President Joe Biden said that the United States would never recognize any portion of Ukrainian land annexed by Russia as being anything other than a constituent part of Ukraine.

“Russia’s referenda are a sham – a false pretext to try to annex parts of Ukraine by force in flagrant violation of international law, including the United Nations Charter. We will work with our allies and partners to impose additional swift and severe economic costs on Russia,” President Biden said in a press statement.

The United States, the North Atlantic Treaty Organization, and the European Union have formed a powerful trans-Atlantic force, particularly in terms of sanctions, according to European officials.

“This aid package has been coordinated very closely with our allies and partner countries, including the U.S.,” said Paloma Hall Caballero, a communications officer for the European Union’s External Action Service. “The main objective is to put maximum pressure on Putin and just stop financing his war machine.”

Upcoming elections in the U.S. cast considerable uncertainty over how the federal government will address the war in Ukraine moving forward. If Republicans win control of the House in November, Minority Leader Kevin McCarthy has a chance to become Speaker.

The California Republican has his opinions about U.S. aid to Ukraine.

“I think people are gonna be sitting in a recession, and they’re not going to write a blank check to Ukraine,” McCarthy told Punchbowl News on Tuesday. “They just won’t do it. … It’s not a free blank check.”

Stano, the E.U. spokesperson, is confident the United States will continue to be a reliable ally regardless of the result of the elections. He said that continued coordination on sanctions and aid packages by the United States and European Union will ultimately help defeat Putin.

“This is why we are really taking all of the measures to put him down economically,” Stano concluded. “We are not a military alliance, so we cannot fight him militarily, but we can fight him economically, politically and financially.”