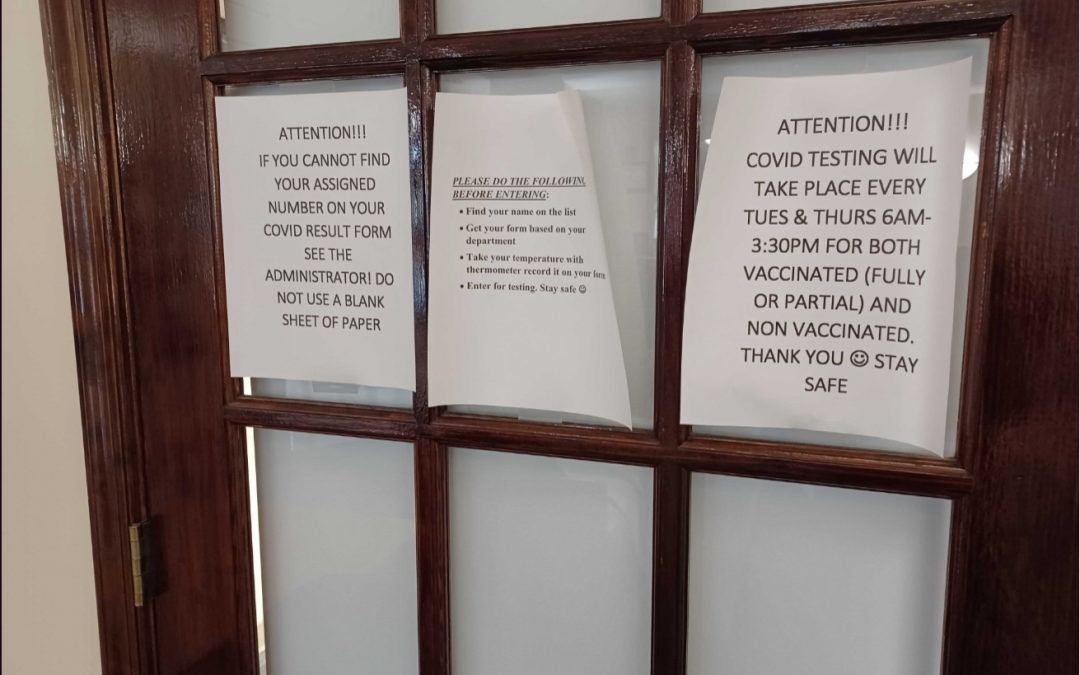 Notices on the meeting office’s door of a nursing home in Arlington, Va. They test everyone twice a week to ensure the senior residents are safe from COVID. (Pingping Yin/MEDILL NEWS SERVICE)

WASHINGTON — Holly Schickler, a retired flight attendant living in Arlington, Va., was fully aware of the new bivalent booster that protects against two variants of COVID-19, not long after the Centers for Disease Control recommended it last month. She was determined to get the fifth shot of the COVID vaccine when she saw her doctor next time.

“We’re like pin cushions,” said Schickler, 75, who was already vaccinated and boosted twice, has grappled with a chronic lung ailment for years. She said it’s necessary to keep getting the boosters to protect her lungs.

But many senior Americans have responded more like Jeff Nistler, 64, a salesman from Utah. He received his first booster in July and was sure that it would be his last vaccine for COVID.

The daughter of an 87-year-old lady said she had to persuade her mother to get the first four shots, but now she had given up trying to force her mom for a fifth one. Both the mother and daughter asked to remain anonymous for privacy’s sake.

Americans over 65, who constitute 16% of the population, are more vulnerable to COVID. They account for three-quarters of the nation’s 1.1 million deaths. However, their interest in keeping their vaccinations up-to-date is steadily declining, data from the CDC shows.

Only 8% of seniors said they had received the updated bivalent booster, while 37% said they intended to “as soon as possible,” according to?a survey from Kaiser Family Foundation(KFF), which was published at the end of last month. That’s down from 93% who received a primary vaccination.

One senior who decided to get the latest COVID-19 booster was President Biden, and he got his Tuesday in front of cameras. He used the opportunity to urge all eligible Americans to bolster their protection before a possible COVID wave this winter.

“It’s incredibly effective. But the truth is, not enough people are getting it. We’ve got to change that,” Biden said. Then he rolled up his sleeve, saying he wanted to show people “how easy it is to get that shot.”

Nistler was not impressed by Biden.

“I’m not a big fan of his. Americans are smart. We can figure out what we need and don’t need,” Nistler said, “We don’t need some 80-year-old man telling us what to do. Whether it’s Biden or Fauci.”

Nistler was referring to Anthony Fauci, 81, a top federal health official, who stood behind Biden, 79, when the president delivered remarks before getting a shot.

Even Schickler, who is willing to receive any recommended booster, said Biden’s words and his choice to get a shot himself  “don’t make a difference to me.” She said only instructions from the Food and Drug Administration and CDC impact her vaccine decision.

Even at nursing homes, which lost over 200,000 residents and staff to COVID in the pandemic as of January this year, people have been slow to get the latest boosters, according to another survey from KFF.

A federal mandate requiring nursing home staff members to be vaccinated remains in place. But it does not include boosters. Only about half of nursing home workers had received a booster, and in Missouri, Alabama and Mississippi, only one-third had.

Paula Gupta, an activity manager in a nursing home in Arlington, Va., even had not heard about the updated booster. The staff of the nursing home where she works continue to wear N95 masks and goggles and educate residents not to gather. However, in terms of whether boosters are effective, Gupta was skeptical. “Who knows?” she said.