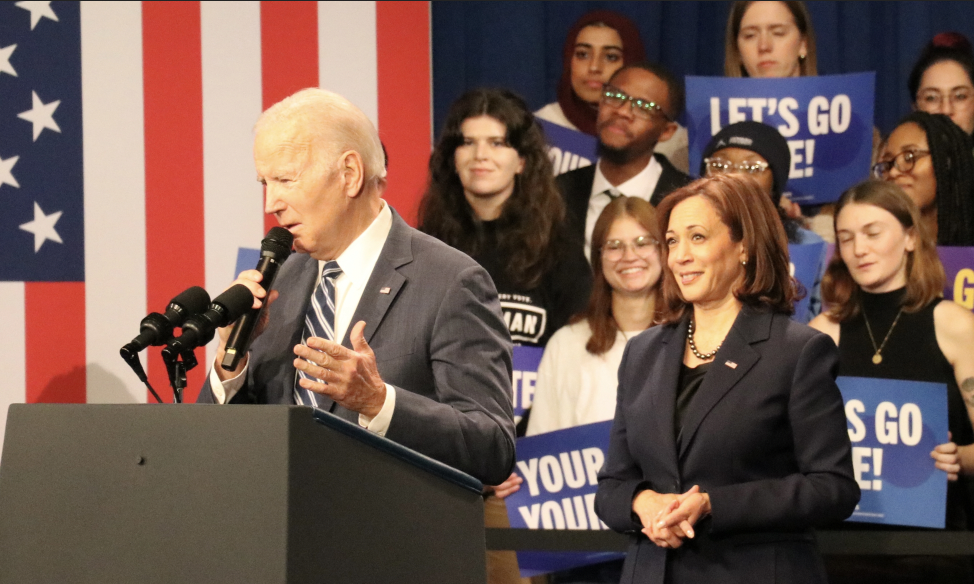 WASHINGTON – Although Democrats are projected to lose control of the House, President Joe Biden and Vice President Kamala Harris presented the election results as a victory at a Thursday Democratic National Committee event with campaign workers.

“We did beat the odds,” President Biden told the crowd.

The president and others called this a historic moment as they celebrated. Democrats will keep control of the Senate no matter what the results are in the Georgia runoff next month.

“We lost fewer seats than any other Democratic president’s first midterm election in at least 40 years,” Biden said.

Even though one chamber of Congress may go to Republicans, Democrats fared better than past years where presidents lost more seats after their first two years in office.

The president and vice president were also joined by the first lady Jill Biden and second gentleman Doug Emhoff. As the couples clapped and cheered along with the audience, they were also joined onstage with over thirty campaign workers holding up campaign signs from 2020.

Harris thanked them for “working the late nights” and protecting democracy.

“You fought for rights and freedoms that will make our country more fair, more safe and stronger and you are not fighting alone,” Harris said.

The event also highlighted the winning campaign issues such as on abortion, social security and the progress in the past two years since the onset of the COVID-19 pandemic. Once again declaring the need for Congress to codify Roe v. Wade, Biden also stated that he would veto any bill that seeks a national ban on abortion.

DNC Chair Jaime Harrison took the stage prior to Biden and Harris to celebrate as well, but reminded voters that every race has not been decided. Their next focus will be the Georgia runoff.

To underscore just how important these midterms were, Harrison said the DNC spent $90 million in these midterms, which is three times the amount spent in 2018.

Historically, the president’s party usually loses seats in their first midterms. In the past 22 midterms, president’s have averaged a loss 28 House seats and four Senate seats, according to an analysis.

“We knew history wasn’t on our side Tuesday, but the American people were,” Harrison said.