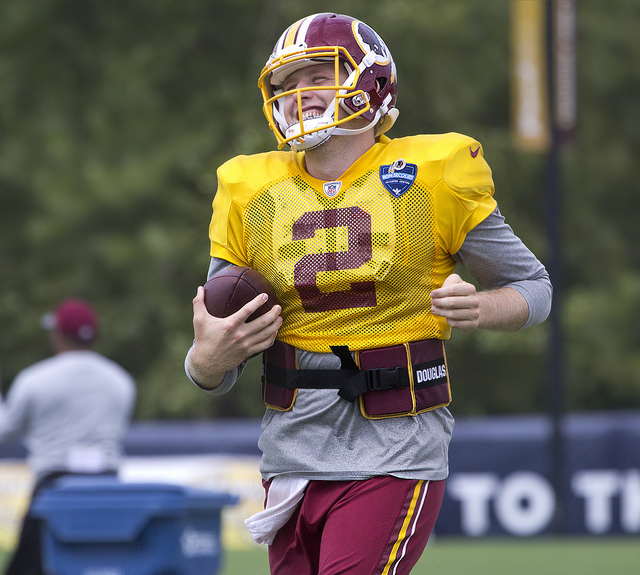 RICHMOND, Va. — He still looks like the young college star he was at Indiana and has the same urgency to learn, but now, Washington Redskins backup quarterback and Modesto, California native Nate Sudfeld wants to be a jack of all trades, ready to help his new team succeed in any way he can.

The third-string quarterback gave the team’s coaching staff a glimpse into the kind of player he could be on the road against the Atlanta Falcons in the first preseason game Thursday. Sudfeld was on the field for the second half of Washington’s 23-17 loss, completing 10 of 15 passes for 89 yards and a 6-yard touchdown in the fourth quarter.

Headed into the game, coach Jay Gruden said he wanted to see how his rookies process the information and strategies they’ve been given in training camp and organized team activities.

“That’s what it’s all about,” Gruden said. “When the lights cut on, who is going to show up and play in a big way, protect the football, play assignment-sound football, fundamentally sound football and make plays? At the end of the day, it’s about making plays, and hopefully those guys will step up and do that.”

After two weeks of Sudfeld’s first pro training camp, the team’s sixth-round NFL Draft pick zeroed in on two goals for the preseason as he prepares to sit comfortably behind Kirk Cousins and Colt McCoy on the team’s depth chart.

“Two big things I’d say [are] understanding — understanding the playbook, understanding what we’re trying to do — and then quickness,” Sudfeld said Tuesday after practice. “Quicker mind, which comes with understanding, and quicker feet, quicker arm. I just want to be decisive and go out there and know what I’m doing and play fast.”

Last year in his final season with Indiana, Sudfeld had the highest quarterback rating in the Big Ten and led the conference with 297.8 yards per game and completed 60 percent of his passes.

Now, he’s willing to do anything to facilitate Washington’s improvements, as well as his own. He said he’s consistently asking Cousins and quarterbacks coach Matt Cavanaugh what he can do to help, even if it’s something simple like watching cutups when they can’t.

“When I’ve had good days, they’ve come and told me,” Sudfeld said. “If I had one day where I didn’t really like what I did, they sat down with me and said, ‘Listen, Aaron Rodgers didn’t play until he was going into his fifth year. You’ve got time, and it’s a process. Don’t get too beat up, but don’t be complacent, and keep working and doing a good job.’

“So giving me that confidence has been really awesome. They don’t have to take time to sit down next to me and talk to me, but that’s just the kind of people they are.”

Washington’s next preseason game is Friday when it hosts the New York Jets. Sudfeld will face off against his brother, Zach, a tight end.