Paul “Cooter” Jones: A fixture in Reading for over 60 years 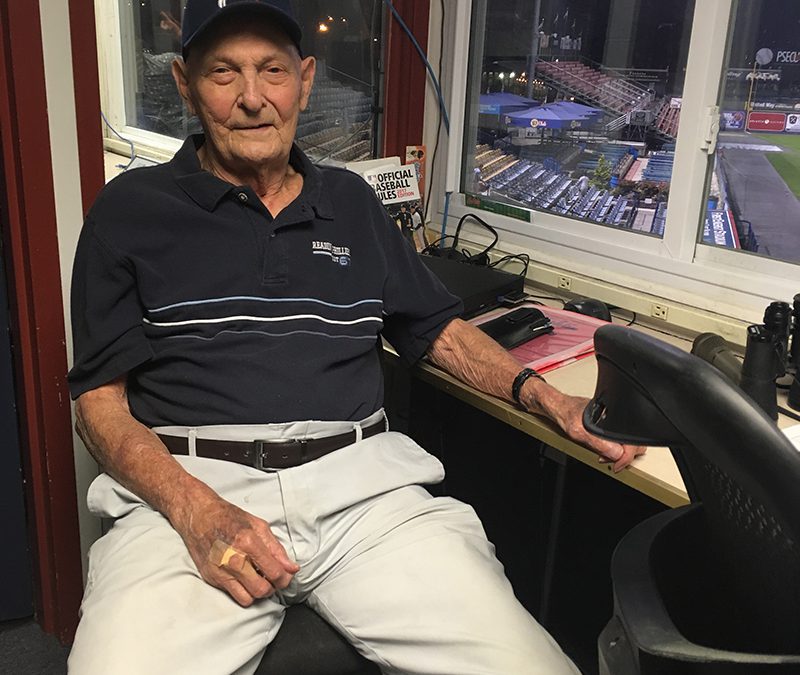 Cooter Jones at his desk following a Reading Phillies game in July.(MEDILL/Brent Schwartz)

READING, Pa. –  It was fireworks night at First Energy Stadium, with fans of the Reading Fightin Phils getting over their team’s 2-1 loss to the Binghamton Rumble Ponies by enjoying the light show above them.

But in the press box, the Fightin Phils’ media staff were more interested in a check-in with Paul “Cooter” Jones, 85, their official scorer for the night.

They questioned Jones about a pitch that flew past the Rumble Ponies’ catcher Colton Plaia – Jones had called the play a passed ball. He remained firm on his call, and the ruling was upheld. And why wouldn’t it be? After all, Jones has been around baseball his entire life.

After being an All-State baseball player during high school in Hickory, North Carolina, Jones played minor league baseball for eight seasons (his last stint with the then Reading Indians) before calling it quits on his playing career in 1959.

“I came to Reading and I met a girl,” Jones said. “We got married, but by 1959 our family was too big for the salary that they paid back in those days. I wanted to teach school anyway.”

Jones ended up coaching junior varsity baseball, football and basketball before becoming the head coach of varsity baseball at Reading High School. Jones held that position for 24 seasons, winning a state championship in 1983.

“The hell of it is, I can remember those last four state {playoff} games like me talking to you right now,” Jones told me.

To prove it, Jones explained a sequence in that state championship game in vivid detail, culminating in a Reading 2-1 win. Overall, Jones coached Reading high school to a 327-196 record.

Jones is in the Reading High School Athletic Hall of Fame.

It doesn’t mean much to anybody, but it means a hell of a lot to me,” Jones said. “For them to think enough of me for that.”

After retiring from coaching in 1992?? Jones now spends some nights as the Fightin Phils’ scorekeeper and other nights as announcer.

“That’s Austin Davis warming up in the pen,” Jones said to the 6,345 fans attending the Fightin Phils night game against the Binghamton Rumble Ponies on July 14.

Jones doesn’t score as often, citing back problems that make it difficult to get to the stadium. It’s more of a once-a-week gig for him now, but nonetheless important to him.

During the end of our conversation Fightin’ Phils Director of Media Relations Michael Ventola came over in need of Jones once more.

“I need him  for one more second when he’s done,” Ventola said. “I just need you to go over one more thing.”

“Was that the play with (Reading third baseman Mitch) Walding over there?” Jones said.

Jones then explained his reason for calling it a fielding error. Again, it was upheld. It’s hard to again with a guy who knows baseball so well.