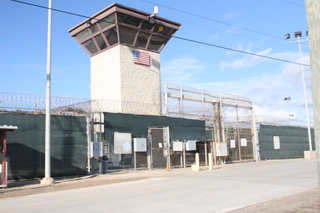 Gate to detention camps 5 and 6 at Guantanamo Bay U.S. Naval Base. (Oyin Falan/MNS)

GUANTANAMO BAY, Cuba — The majority of the first day of pre trial hearings Monday for accused 9/11 mastermind Khalid Sheikh Mohammed and four other accused conspirators focused around what a defense attorney referred to as a “mystery motion” involving the dissemination of classified information on an unclassified network.

The defense teams for Mustafa al Hawsawi and Ammar al Baluchi, also referred to as Ali Abd al Aziz Ali, were initially excluded from the mystery motion – officially referred to as AE 532 – filed by the special trial counsel.

Walter Ruiz, defense attorney for al Hawsawi argued that because the defendants were being jointly tried, all five defense teams had a right to the same information.

Army Col. James Pohl, the judge presiding over the Military Commission, agreed and ordered the release of the information to all defense teams.

Following an hour-long recess, the judge decided that arguments relating to unclassified information could be made in an open session.

The content of the mystery motion was the possible ongoing investigation about the mishandling of classified material by a member of Walid bin Attash’s defense team. The classified information that was disseminated was part of a separate motion that was attempted to be filed to the judge but was rejected because of the misclassification of information.

Bin Attash’s counsel reported the “unintentional mix-up,” which led to a meeting between him and two Washington Headquarters Services officials, according to Cheryl Bormann, defense attorney for bin Attash.

However, according to Bormann and Mohammed’s defense attorney, David Nevin, they have been accused of willfully spilling the information.

A member of the defense team for al Hawsawi said after the day’s hearing that it is was not clear how long the attachment was on the unclassified network and that it was sent to about 100 to 130 people, some with access to view the classified information and some without access. It apparently is not known how many people actually viewed the information.

The main disagreement between the special trial counsel and the defense teams was the status of the initial investigation.

Army Maj. Michael Lebowitz, representing the U.S. special trial counsel, said a review showed that no defense had access to classified information limited or taken away.

According to Lebowitz, the matter will now go through the “normal course of business.” The process, he said, could take over a year.

The defense disputed Lebowitz’s explanation of the process and asked that it be revisited at a later date, giving lawyers time to review a report that apparently contradicts Leibowitz’s argument.

Pohl granted the request and moved the argument to Tuesday morning.

The rest of the proceeding went on as a closed hearing.

According to the Military Commission, the five men have been charged with “conspiracy; attacking civilians; intentionally causing serious bodily injury; murder in violation of the law of war; hijacking or hazarding a vessel or aircraft; and terrorism.”

All five defendants face the death penalty if convicted.

Mohammed is the highest profile defendant and is accused of being the main orchestrator of the 9/11 attacks. He is also accused of proposing an idea of hijacking commercial airlines and crashing them into buildings in the United States to Osama bin Laden as early as 1996, according to his official charges sheet.

In a military transcript from a 2003 Combatant Status Review Tribunal Hearing, Mohammed said that he was “responsible for the 9/11 Operation, from A to Z.”

In the same transcript, it shows that Mohammed admitted to participating in 31 other instances. Including, the 1993 World Trade Center bombing, the killing of American-Israeli journalist Daniel Pearl in 2002, and for the bombing of a nightclub in Bali, Indonesia.