For Mystics, Every Moment at the Capital One Arena Is the Best Memory 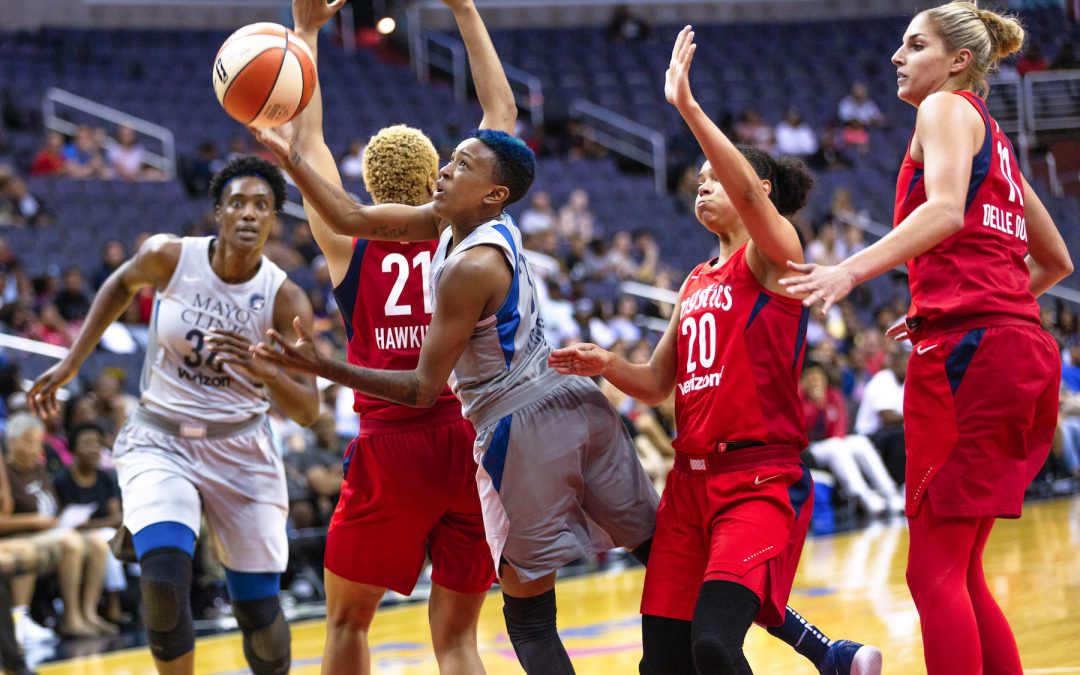 The Washington Mystics during a regular season home game at the Capital One Arena. (Photo by Lorie Shaull via Flickr / CC BY 2.0)

WASHINGTON — Clinching a win in the last regular season home game on Friday meant a lot to the Washington Mystics: Getting closer to a double bye in playoffs and taking the series against the Los Angeles Sparks. It also was a perfect departing shot as the team ends its 20-year Capital One Arena run.

Natasha Cloud, who is in her fourth year with the Mystics, created her best memory of playing at the Capital One area on the team’s last night there.

In what was described as a playoff-level confrontation by head coach Mike Thibault, the Mystics had only 3.8 seconds to finish a shot to break a 67-67 tie against the Sparks in the fourth quarter. After a timeout, Cloud, who was originally the “second option” in the strategy, got possession of the ball and scored a buzzer-beater against Alana Beard, one of the best defensive players in the league.

“Natasha couldn’t make a shot the whole night (but) makes one at the end when it matters,” said Thibault.

Cloud said she didn’t have time to think too much before launching the game-deciding shot, but after the clock stopped, she realized she changed the whole night.

“This is a championship to me,” Cloud said.

Mystics forward Monique Currie said not playing in a familiar home court may make the playoffs harder for the team.

“Having that home court advantage is big but it takes some away from it because you are not playing in your actual home court,” she said. “But we will make the best of it and be our best to play the game.”

Currie, who was raised in Washington, remembered sitting in the stands watching the Mystics at the start of the team in 1998; she became a loyal fan, attending many games.

“I like being here downtown. When you think of professional basketball, you think of Verizon Center at the Capital One Arena,” she said.

Currie returned as a member of her hometown team in 2008, two years after turning professional. She stayed for seven years, leaving in 2014 to play for several other WNBA teams, but returned this year to become the longest-serving player on Mystics’ current roster.

“This arena has some of the best fans in the whole league,” she said.

In May 2017, Elena Delle Donne joined the Mystics and soon became the marquee player at the Capital One Arena. She averaged 19.7 points per game during the regular season and led the team to the playoffs last year.

In the first round playoff when the Mystics hosted the Dallas Wings, Delle Donne contributed 25 points, 11 rebounds and 2 blocks to the 86-76 victory. She considered it the best game she has played in Washington and her most unforgettable memory at Capital One Arena.

There has been criticism of the Mystics’ new stadium. While the average attendance of Mystics game last season was 7,771, St. Elizabeth’s East holds only 4,200. This means about 45 percent of fans cannot get tickets to games, and the team will almost surely see a decrease in ticket revenues.

It also will be a problem in the upcoming playoffs at the Smith Center, which can seat only 5,000 fans.

Delle Donne said there are advantages to a smaller stadium.

“It’s nice here but it feels a little empty. It’s such a big stadium,” she said. “I’m excited to have a tighter stadium that we can fill up a little more.”