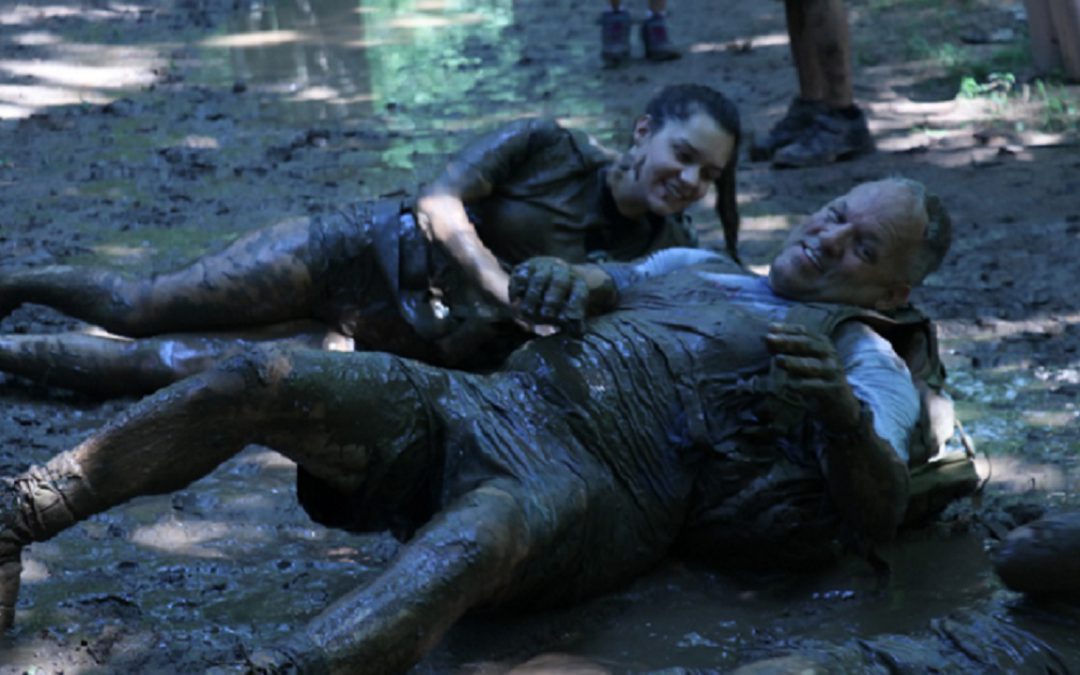 Torch Ruck Club members do barrel rolls in the mud before they begin their four-mile ruck on Sunday morning. (Sruthi Darbhamulla/Medill News Service)

FREDERICK, Md. — On a recent Sunday morning, 10 people created a pool of mud in Ballenger Creek Park and did push-ups, rolled around and crawled in it, their sole aim to get as muddy as possible. That mission accomplished, they set out to hike four miles with weighted backpacks — or rucksacks.

This is just one of the many creative ways the TORCH Ruck Club of Frederick engages in rucking, a form of exercise gaining popularity across the country, with clubs in places ranging from Colorado to Illinois.

Rucking is “a quintessential soldier task,” says Danny Farrar of SoldierFit, a fitness organization with centers in Frederick and elsewhere in the Maryland, Virginia and Washington area that combines military bootcamp style exercises with fitness training. “You have to carry weight and live out of the rucksack.”

SoldierFit has a rucking group, and TORCH Ruck Club was formed by a group of Frederick CrossFit members in January. They wanted to launch a club that would create a way for families to engage in outdoor activities together and, because the founders had roots in the military, rucking was an appealing answer.

Debby Fair, gym consultant and one of the leaders of the club, came up with the Ruck Club idea and decided to name it TORCH after her father, Sgt.  Ken Musgrave of the Montgomery Police Department, who died in 1994.

“He was nicknamed Torch because he was a leader, had a big number of arrests,” said Geoff Rand, a co-leader of the club, who, like Musgrave, is an officer for the Montgomery Police Department.

“Police ID numbers and badges are recycled but they retired his badge number. It was a great honor,” Fair said.

The logo of the club includes “OD 550” in honor of Musgrave’s off-duty badge number.

The TORCH Ruck Club, which has the words “blue line strong” as part of its name, has many police and ex-military members. Its third leader, Craig Ciccarelli, is a Maryland State Police trooper.

In April, the club was asked to become an affiliate by GORUCK, a company that specializes in manufacturing rucksacks and holding rucking events, founded by an Army Special Forces member.

Clubs affiliated to GORUCK are eligible for monthly callouts, or themed rucking events. July’s callout was the mud ruck, requiring at least four members to make themselves completely muddy and then ruck for four miles.

For their July 28 ruck, the club members carried containers holding four gallons of water to Ballenger Creek Park to create the mud.

“It opens the group up. … A group of strangers bond over a silly thing like crawling in the mud,” says Neivy Read, a member of the Army National Guard who participated in the mud ruck and regularly rucks and hikes in the region. “It was fun.”

The TORCH Ruck Club has participated in other callouts.

“We did the one where we needed to carry a cooler. Then there was an elevation one, where you needed to ruck to a particular elevation,” Rand said.

Some rucks are fitness events; some are held for a specific, usually commemorative purpose. Next weekend, on Aug. 3 and 4,  the “31 Miles for 31 Heroes” ruck in Washington, will honor the 30 members of the American military and a military working dog killed when a CH-47 Chinook helicopter was shot down by Taliban fighters in Afghanistan on Aug. 6, 2011. Many were Navy SEALS. Three members of Torch Ruck Club, including Rand, will participate.

“It’s the longest distance I’ve rucked outside the military,” said Rand, who was an officer in the Army Reserves for 10 years.

Terry Ford, who served with many of those who lost their lives, started the annual event in 2012.

“I just got the idea to ruck a mile for each of the people who died and to read a bio of them along the way,” says Ford.

The 31 Miles for 31 Heroes ruck will start at the Lincoln Memorial at 8 p.m. on Aug. 3 and will end at approximately 8 a.m. on Aug. 4 at Section 60 of the Arlington National Cemetery, where some of the 31 victims of the tragedy are buried. Around 300 people have registered.

On Oct. 25, a 15- to 20-mile ruck will be held in Frederick by GORUCK to honor Marines who fought during the Second Battle of Fallujah, a military operation against insurgents in Iraq at the end of 2004.

But rucking is not just for long distances. As Farrar points out, all you need is a backpack.

“If you’re in horrible shape, you’ve never done anything, just throw a water bottle in that bad boy and start walking.”