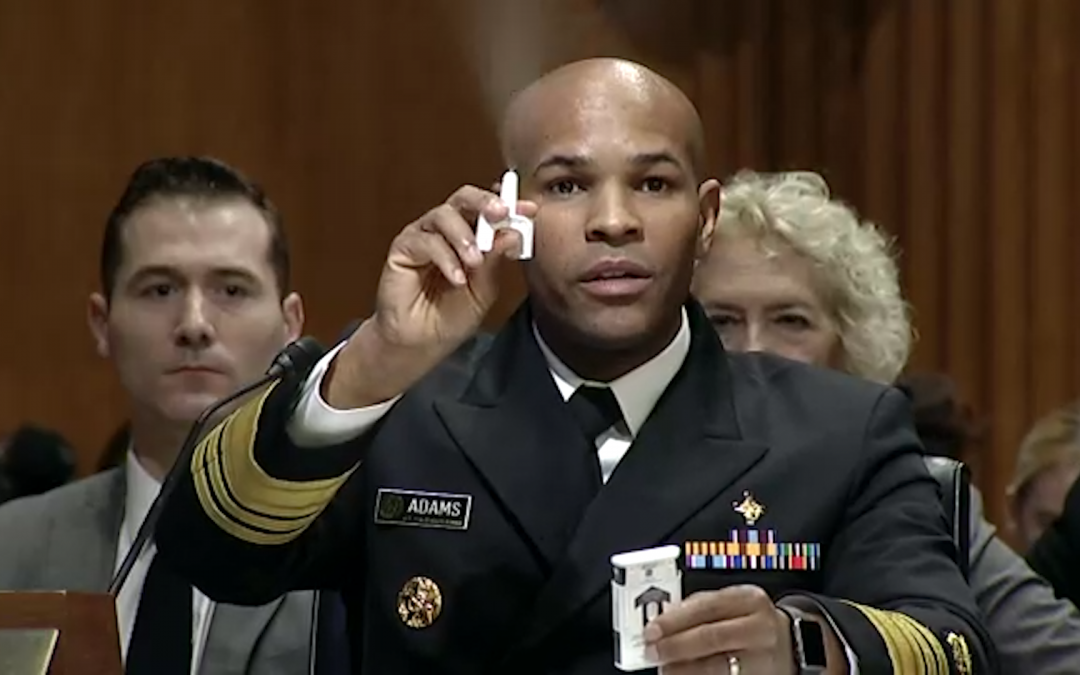 Surgeon General Jerome Adams pumps a mist of the opioid-stopping nasal spray Nalaxone into the air during a Senate Finance Committee hearing. (Screenshot/CSPAN)

WASHINGTON – Surgeon General Jerome Adams warned a Senate committee Thursday that efforts to combat the opioid epidemic in the U.S. fall short and laid out a new approach that would end the overprescription of addictive pills.

“We still have an epidemic of untreated pain in this county. For years we foolishly threw opioids at the problem and now we’re pulling back from that. But we also need to be able to measure what we’re replacing those opioids with,” Adams told the Senate Finance Committee.

Adams said early intervention is critical, addiction treatment must be integrated into mainstream health care, carrying Nalaxone can save a life, comprehensive community-based support services are essential and society must move from a criminal justice-based approach to the opiod crisis to a public health and partnership based one.

To drive home his point on Nalaxone, a nasal spray also known as Narcan that is widely used by first responders to counter the effects of an opioid overdose, Adams uncapped his own unit of Nalaxone and sprayed a mist of it into the air. “It’s that easy to save a life,” he said.

The hearing was held on the one-year anniversary of the passing of a law that provides federal funding for research into alternative nonaddictive pain medications and to provide more access to opioid addiction treatment.

“This is very personal for me, as my brother is currently serving a 10-year prison sentence for crimes he committed to support addiction,” said Adams.

Some witnesses at the hearing lamented the lack of federal guidelines and oversight in dealing with the opioid epidemic. “Consumers, payers and regulators do not have access to any sort of quality measurements on substance abuse treatment centers,” said Gary Mendell, founder of Shatterproof, a nonprofit that works to reduce the impacts of drug and alcohol addiction.

Sen. Bob Menendez, D-N.J., asked the witnesses what legislation the federal government should be enacting.

Mary Denigan-Macauley, director of health care for the Government Accountability Office, which is Congress’ investigative arm, said the federal government should regulate or oversee state-run treatment practices, which vary widely.

Mendell also noted the need to change the public perception of those with substance abuse disorders.

“Stigma is a killer,” he said, “Let’s say that someone gets through all of the hurdles to get quality drug addiction treatment and recovers. Then they enter a society where people don’t want to work with them, be their neighbors, or even be their friend. These people feel that.”