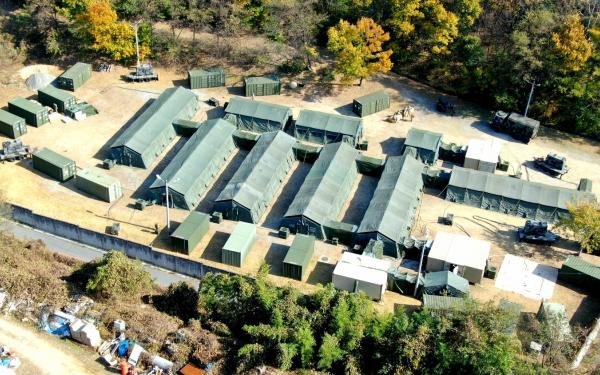 WASHINGTON – South Korea has more cases of coronavirus than any country outside China – 1,261 – and that now includes the first U.S. serviceman stationed in the country, according to the United States Forced Korea.

The 23-year-old male soldier is stationed at Camp Carroll, which is Daegu in south-central South Korea where Shincheonji religious group, who authorities say played a big role in spreading the coronavirus, had a large gathering. At least 13 South Korean soldiers have been infected, according to Defense Minister Jeong Kyeong-doo.

Twelve people have died from the coronavirus in South Korea, while approximately 1,300 people are infected.

That’s a dramatic change from 10 days ago when there were only 29 cases in South Korea.

Concern over the spread of the virus may cause a delay in the joint U.S.-South Korean military exercises on the Korean Peninsula, said Defense Secretary Mark Esper in a Monday news conference.

South Korea’s military has canceled vacation days and ordered troops to remain at their bases, said Jeong. “Unless it’s an inevitable situation, we limited their movements across the nation.”

South Korea’s jump in confirmed coronavirus cases came from members of a religious group called Shincheonji, which the government considers a cult.

“We’re facing a completely different situation after the Shincheonji group infection,” President Moon Jae-in said. About 60% of the South Korean cases have come from Shincheonji, according to Korea Centers for Disease Control and Prevention.

Moon ordered all Shincheonji churches in South Korea to close temporarily and the tracking of its followers’ movements.

This “an absolute and inevitable” decision, Moon said, is needed to protect society and also Shincheonji.

Shincheonji members are “the biggest victim of the coronavirus,” a church spokesman said, adding a request for the wider public to refrain from acting out against the group. Shincheonji said it is cooperating with the government and listing its followers on its website.

After the outbreak, more than five hundred thousand people petitioned for president Moon’s impeachment blaming the government for not handling the situation accordingly and putting the citizens at risk.

Moon’s critics say his administration was slow to limit travelers from China after the outbreak started in the Chinese city of Wuhan and has not allocated enough resources, such as face masks and hand sanitizer, to limit the disease’s spread.

Meanwhile, 17 nations have banned visitors from South Korea to their countries, including Japan, Singapore, Vietnam, Hong Kong, Iraq and Israel. Thirteen other countries have increased their quarantine infection to people who are traveling from Korea.

On Monday, the United States advised its citizens to avoid all nonessential travel to South Korea amid the growing spread of the virus there.