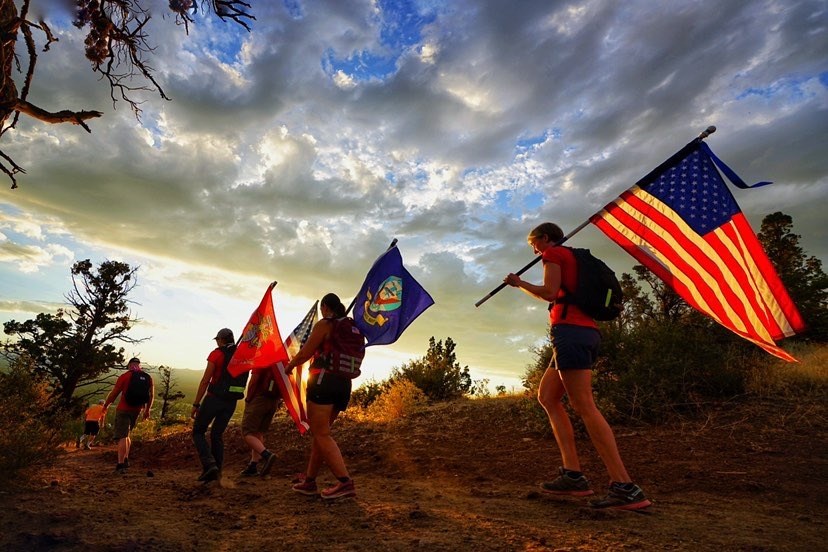 Members of Team Red, White and Blue on a sunset ruck in Bend, Oregon / courtesy of Team RWB via Facebook.

For Scott Tekesky, his time stationed at an Army base on Oahu, Hawaii, far from his family, prepared him for the isolation of sheltering in place in his suburban Atlanta home for months because of the COVID-19 pandemic.

“When you’re in the continental United States and get orders to go to Hawaii, you think beaches and palm trees,” said Tekesky, a former infantry officer who left the service in 2014 as a first lieutenant. “About three or four months into getting there, you had the realization you’re literally on a rock, in the middle of the Pacific Ocean, thousands of miles from the next piece of land and family. In that sense, it prepared us [for COVID-19].”

Through the nonprofit group Team Red White and Blue, where he is now an area director, Tekesky has been connected to the veteran community. He’s relied on that friendship to support him while sheltering in place the same way he relied on fellow soldiers to help him while in Hawaii.

COVID-19 has exacerbated feelings of isolation for many veterans. From anxiety about the future, to financial instability or limited socialization, the pandemic has caused a surge in demand for veteran mental health support organizations, said Erin Fletcher, director of mental and brain health services at the Wounded Warrior Project, a Florida-based nonprofit that supports injured veterans transitioning to civilian life.

“The stigma of mental health was getting in the way pre-pandemic,” she said. “Now’s the time; there’s help and it does work.”

From March to July, WWP’s phone support sessions for veterans and families increased 36%, and referrals to mental health providers increased 52%. WWP has increased its mental health services, despite reshaping its programming to be wholly digital, Fletcher said.

For instance, “Project Odyssey,” a 12-week workshop that brings 15 veterans together to work through mental health concerns, pivoted to being entirely online during the coronavirus pandemic.

WWP sees increased digitization as a permanent new way to reach veterans who might not have been able to access mental health support before.

“This is providing quality resources that isn’t just a Band-Aid,” Fletcher said. “This is something that we’re going to continue to offer.”

The Department of Veterans Affairs has also seen a spike in virtual mental health services during the pandemic, with mental health providers in April experiencing an almost six-fold increase in calls compared with pre-pandemic days.

“VA has been increasing its mental health outreach since the beginning of the pandemic, including increased use of social media, blogs and paid media to increase veteran awareness of services,” a department spokesperson said. “VA has also targeted veterans who may be at increased risk of suicide or mental illness due to COVID-19 with the development and expansion of self-help protocols, like our COVID-19 mobile app.”

The pandemic ushered in a massive increase in telehealth services at the VA, even beyond mental health needs. Between February and June, the department saw a tenfold increase in clinical video visits, officials said.

While telehealth services have expanded at the VA and nonprofits, in-person veteran mental health facilities like the Boulder Crest Foundation, a nonprofit with campuses in Virginia and Arizona that helps combat veterans overcome trauma, have had to scale back some operations.

“Our Warrior PATHH [Progressive Alternative Training for Healing Heroes] program is very sought after, and we’ve tried to keep that running through COVID,” said Ken Falke, chairman of the board at Bouldercrest.

Since the Warrior PATHH program works with groups of eight people at a time, it was possible to adapt the in-person elements to be socially distant, he said. However, Boulder Crest has stopped other programs, such as bringing family members to stay on its campus.

“Sometimes, it takes two to three months to get into one of our programs, and because we’ve had delays [during COVID-19,] people are waiting longer, and that adds to their anxiety,” Falke said. “Isolation has gotta be one of the worst things that can happen to a human.”

Tekesky fought his feelings of isolation through group fitness, which has also helped many veterans struggling with isolation and anxiety during pandemic. Team Red White and Blue is a nonprofit headquartered in Atlanta. With 192 chapters across the country, the organization builds a community for veterans through physical and social activities.

“There is a direct connection between making your physical health a priority and making sure to connect with somebody else every day, and emotional and mental health,” Team RWB spokesperson Bana Miller said.

While the organization has stopped in-person activities, it has seen digital participation “skyrocket,” with almost 250,000 digital event check-ins this year, she said.

“It’s become an opportunity for our members to not only connect within their community but to connect across their communities,” Miller said. “You might have a veteran in San Diego, who is doing a Zoom yoga session with a veteran in Virginia Beach. It’s brought people closer, despite the distance, no matter where they are.”

Beyond providing a sense of community during shelter-in-place orders, Team RWB has also helped people stay active when gyms closed and many spent all day at home. Its socialization and fitness programs also have worked for mental health challenges during the pandemic.

“One of the things our organization has tried to address over the last couple of years is supporting veterans as they transition away from their service,” Miller said. “They’re experiencing all sorts of challenges that include isolation and weight gain. And that seems to be a common experience across the country and probably around the world during this pandemic.”

In March, Tekesky competed in Team RWB’s digital Olympic Games. While teams competed by local chapters, the event encouraged community building within each team, rather than rivalry.

Tekesky, who sheltered at home with his wife Chelsea and 6-month-old son Sawyer, said the mindset he developed in the military helped him manage during the pandemic.

“It’s just a situation that you adapt to, and that’s what makes the military community so capable in a time like this,” he said. “That mindset of assessing [a situation] and accepting it. But then you have to still operate in it. You can’t stop; you have to keep going.”

Keeping an optimistic outlook is necessary, he said. Acknowledging his feelings of anxiety about the future and then focusing on what he could control helped him stay positive and happy during the shelter-in-place order, he explained.