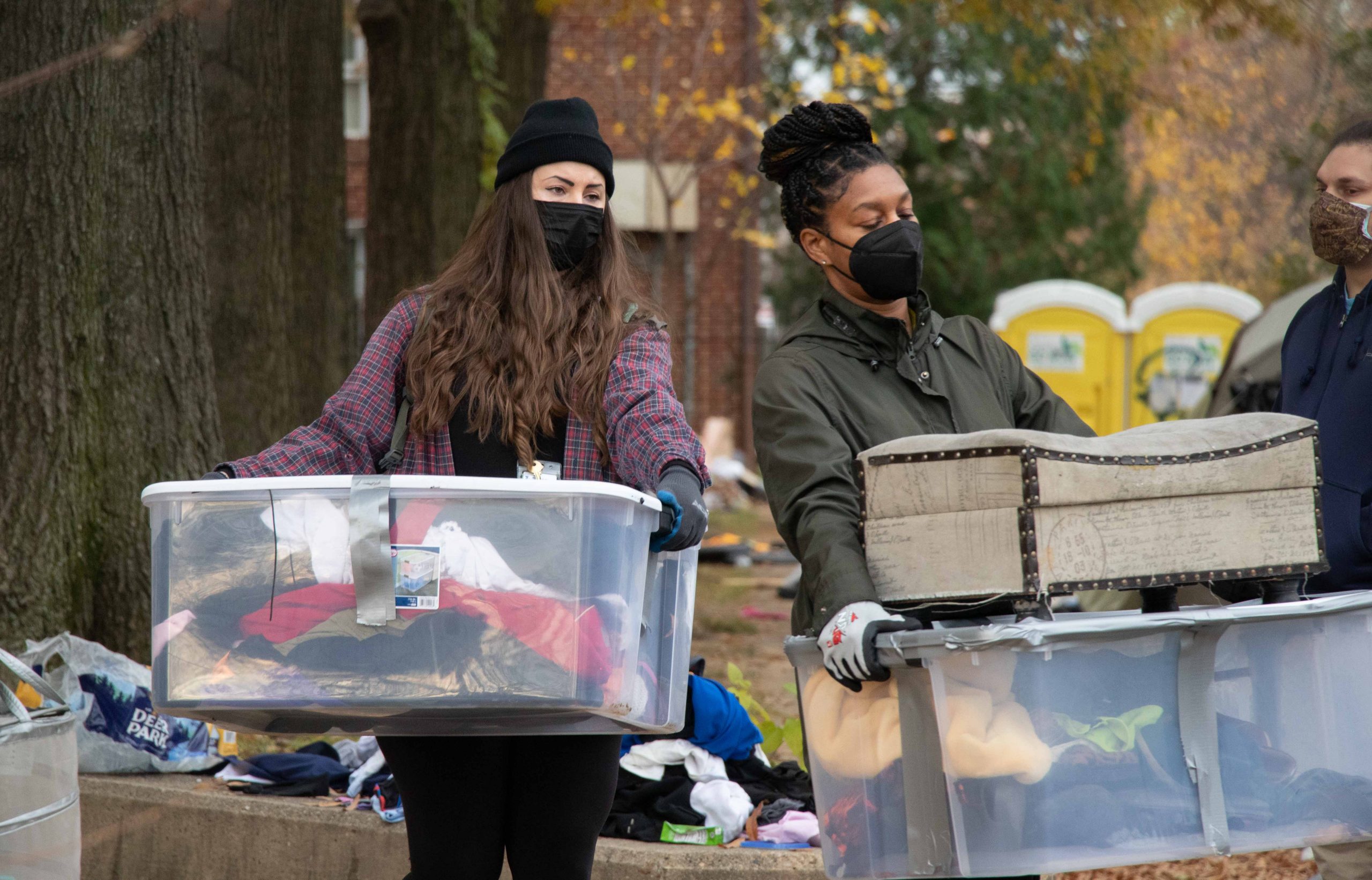 Advocates who were able to get inside the encampment helped residents move their belongings out of the encampment. (Isabel Miller | Medill News Service)

Four out of five members of the D.C. Council’s Committee on Human Services – Silverman, White, Nadeau and Janeese Lewis George, D-Ward 4 – sent a letter to Mayor Muriel Bowser on Friday, urging her to pause encampment clearings until the end of hypothermia season.

Deputy Mayor for Health and Human Services Wayne Turnage, who is spearheading the pilot program, said every resident of the Allen Park encampment has been offered temporary placement in a hotel while the city works to find them longer term living arrangements.

“Given that situation, it is beyond me why anybody would prefer to stay in a park and why anybody would protest getting people out of this situation,” Turnage told Medill News Service, noting that all but one resident still in the encampment had accepted a hotel voucher before the clearing began. 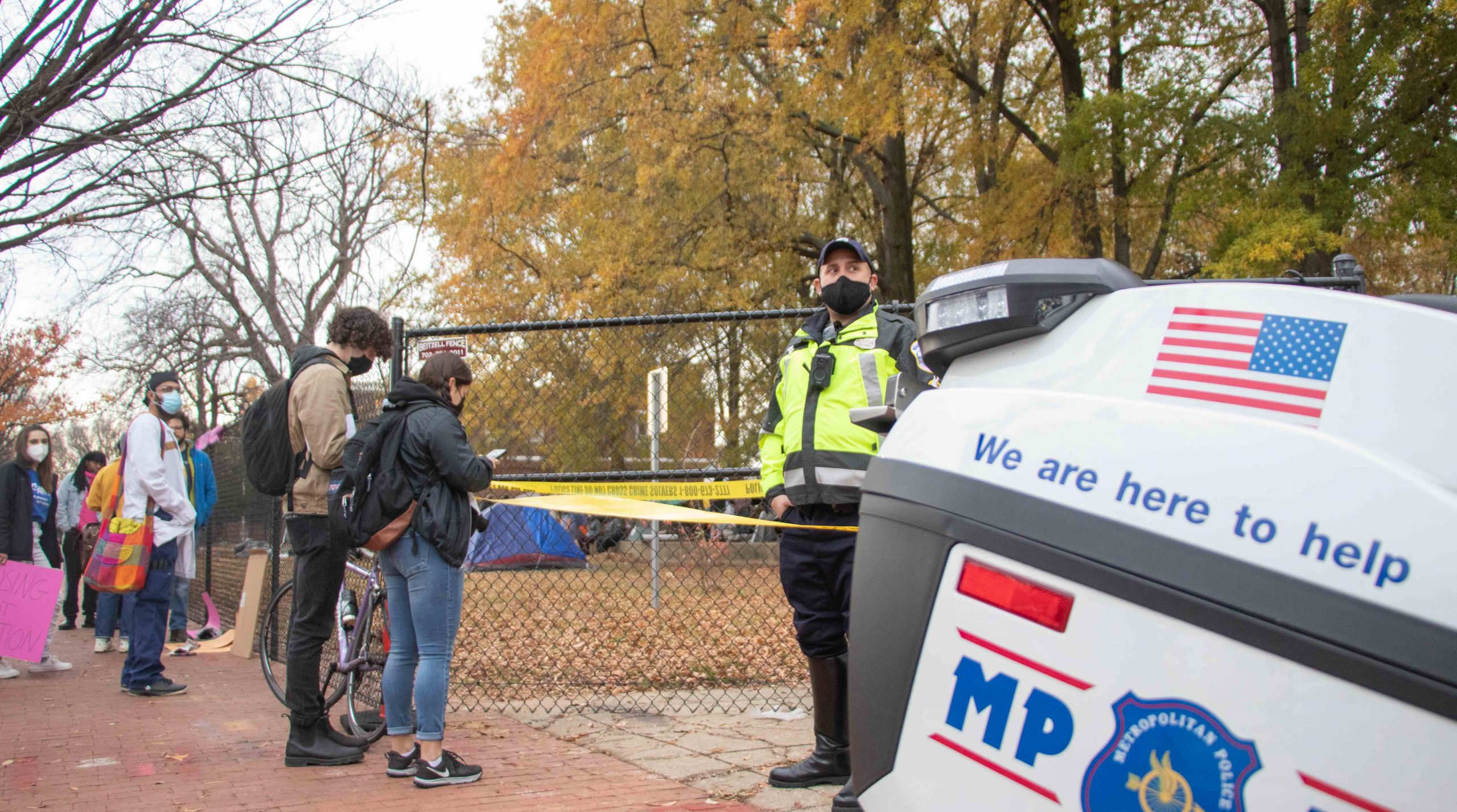 Police blocked off the entrance to the park earlier in the morning for security reasons. (Isabel Miller | Medill News Service)

Twelve individuals from the Allen Park encampment received apartment leases through the pilot program as of Nov. 29, according to the pilot program’s dashboard. Over a dozen people are still waiting for their housing placements, and others who moved into the encampment after city workers compiled their initial list of residents said they struggled to obtain accommodations.

Case workers and volunteers arrived in the early morning to help unhoused residents salvage their belongings from the encampment before it was cleared. The city rented a storage facility for residents to store their belongings and provided transportation from the park to the hotel, Turnage said. 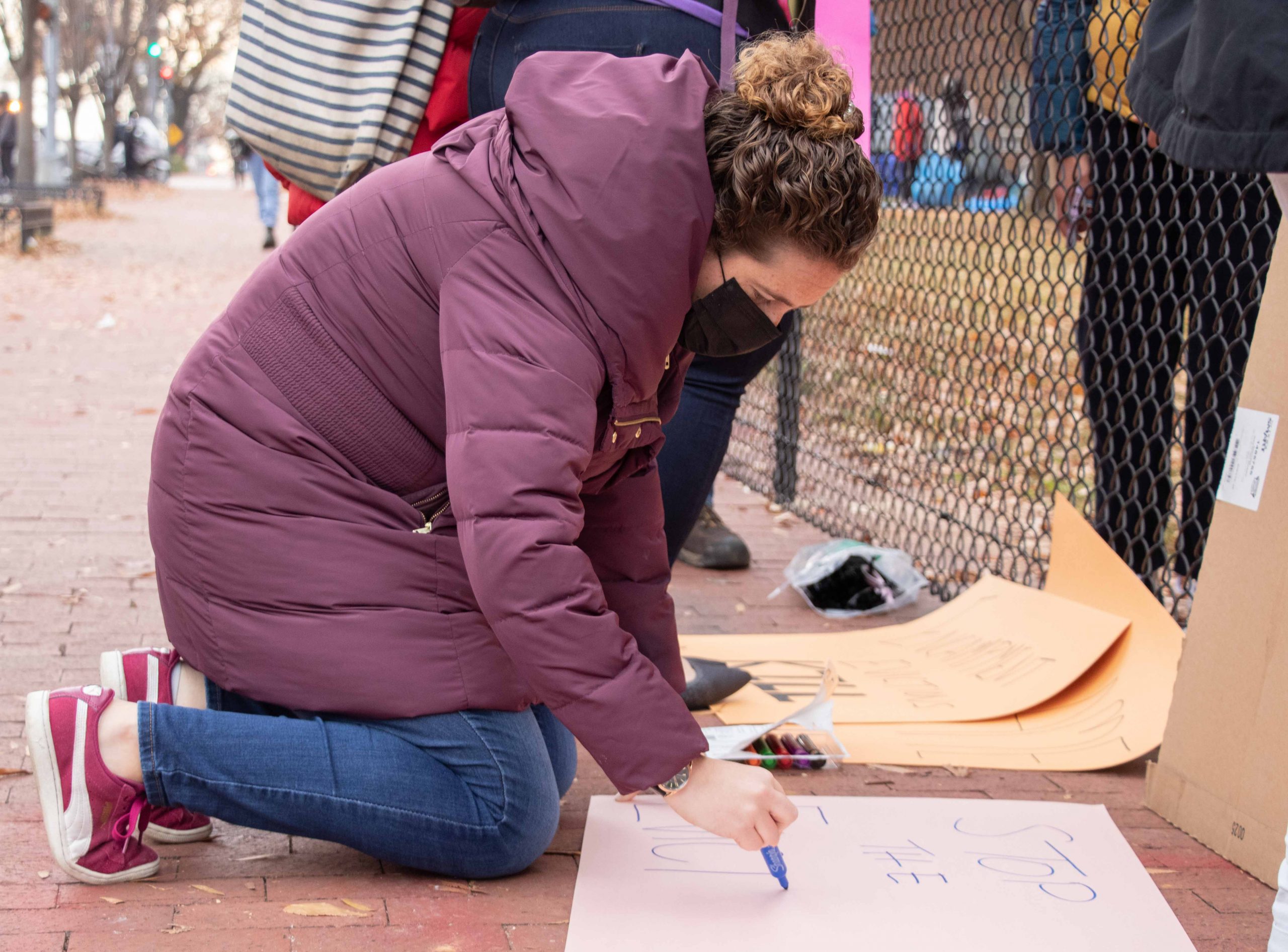 Shiri Yadlin makes a sign to protest the pilot program, Thursday morning. She said she came to the park to show support for her neighbors. “I want to live in a place where everyone has a home and is allowed to stay in their home,” Yadlin said. (Isabel Miller | Medill News Service)

Allen Park was the third of five longstanding homeless encampments scheduled for removal through the pilot program. The city first cleared two underpasses in NoMa and plans to evict two additional sites in East End on Dec. 7.

The Centers for Disease Control and Prevention released guidance in March, advising municipalities not to clear homeless encampments during the COVID-19 outbreak unless individual housing units are available. The guidelines say clearing encampments severs connections between people experiencing homelessness and service providers and can increase the likelihood of spreading the disease to new communities. 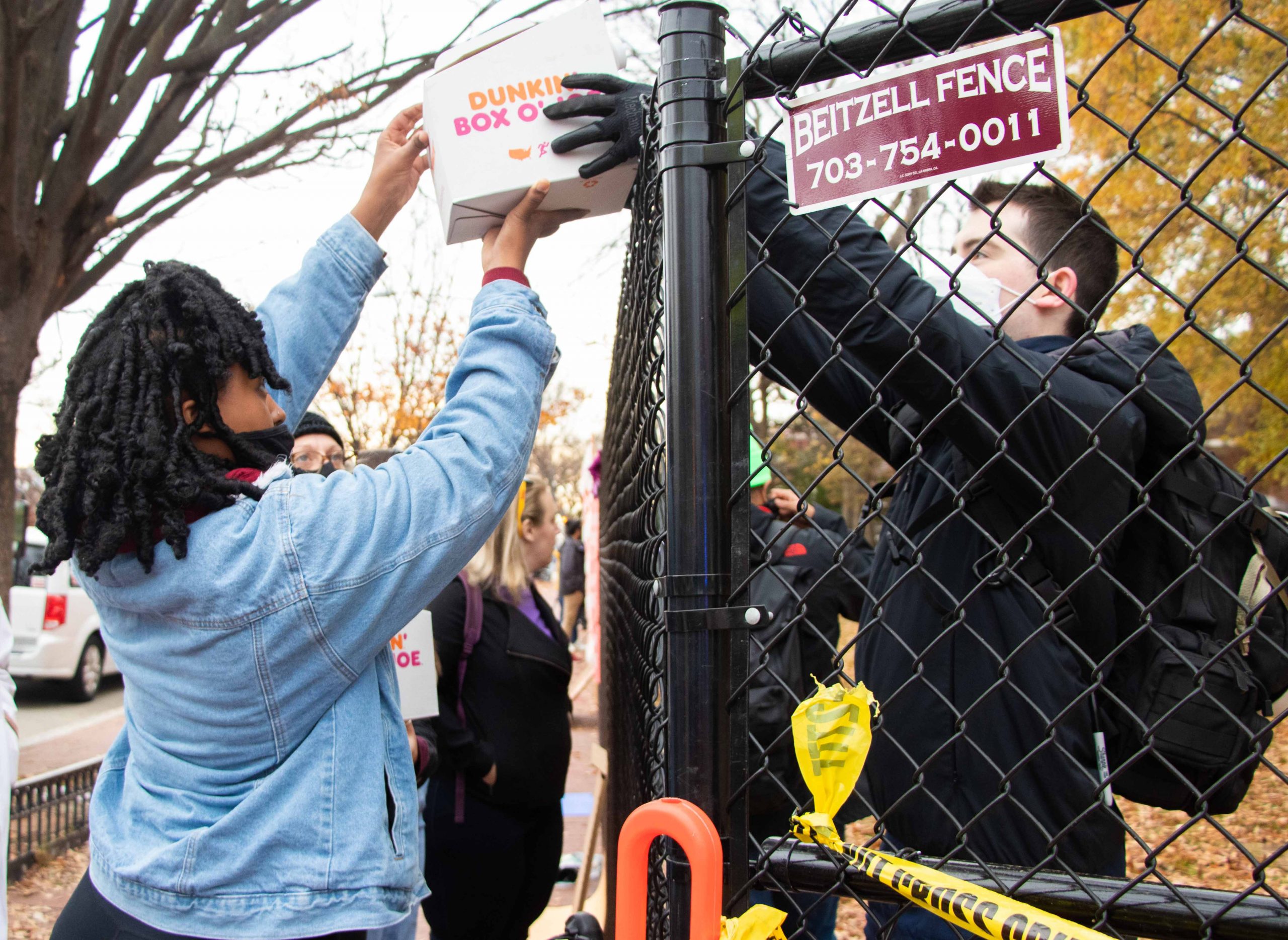 Police blocked off the entrance to the park to civilians earlier in the morning, prompting advocates who did not make it in time to pass over coffee and donuts. (Isabel Miller | Medill News Service)

“We should be housing people,” Israel said, “and this is just criminalizing homelessness, rather than actually housing people and actually trying to get to the root of the problem.”

The D.C. Council held a seven-hour virtual roundtable on Nov. 9 to hear from community members and gather information about future encampment clearings from Turnage and his staff. 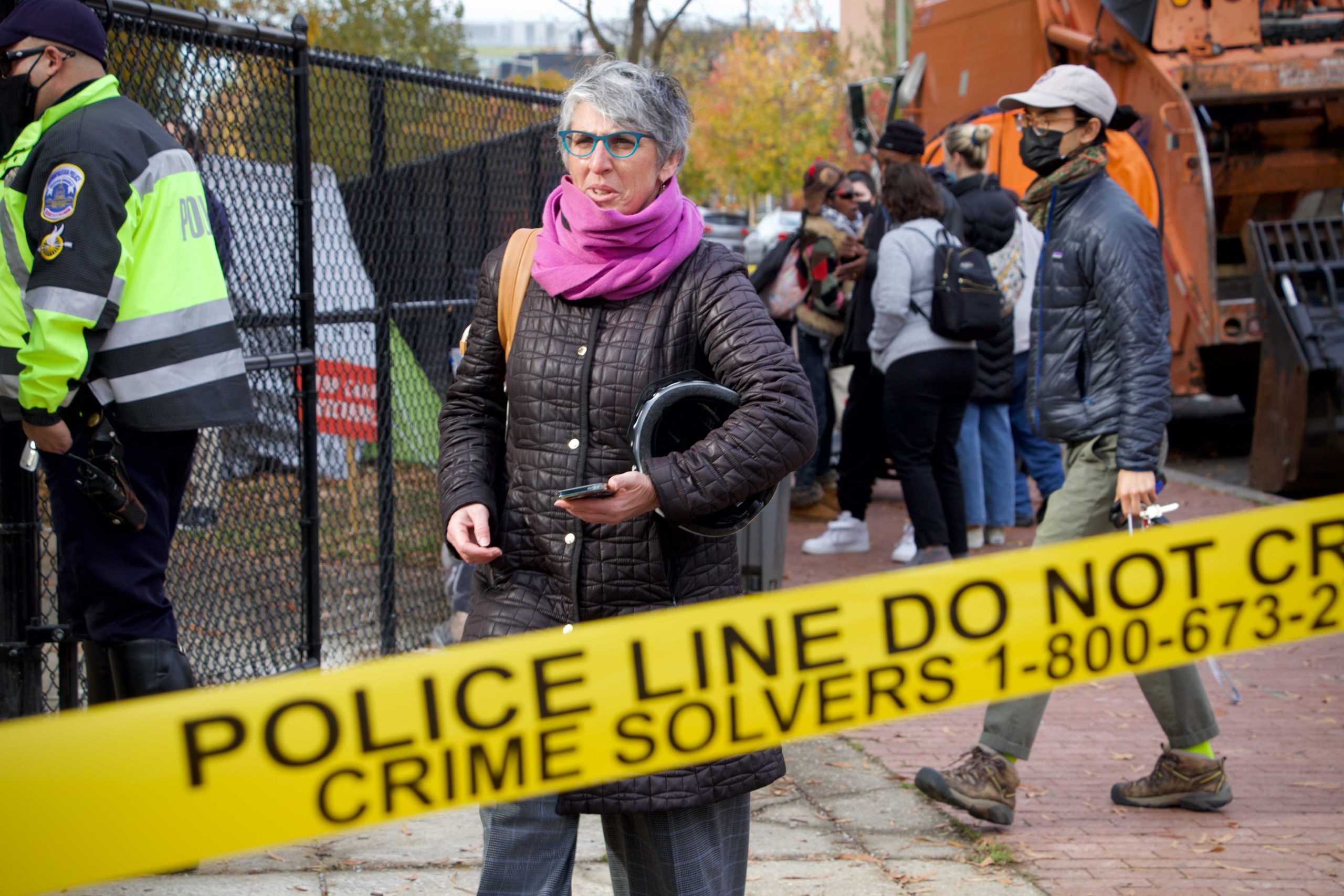 Councilmember Elissa Silverman walks out of Allen Park on Dec. 2, 2021 after talking to and observing how residents lived in the encampment. (Hannah Schoenbaum | Medill News Service)

“During that hearing, I think it became questionable what the real focus of the pilot was, whether it was housing first or whether it was clearing areas that are high visibility,” Silverman told Medill News Service. “I think the focus should remain on housing.”

Silverman said she saw a propane tank and other “hazardous equipment” in the encampment, which created “unsuitable living conditions.”

“I don’t think the deputy mayor is sending the right message with the big front end loader and tons of police,” Silverman said. “I just think it sends the message that, you know, there’s going to be confrontation. I don’t think we should have confrontation, I think we need to get people into housing.” 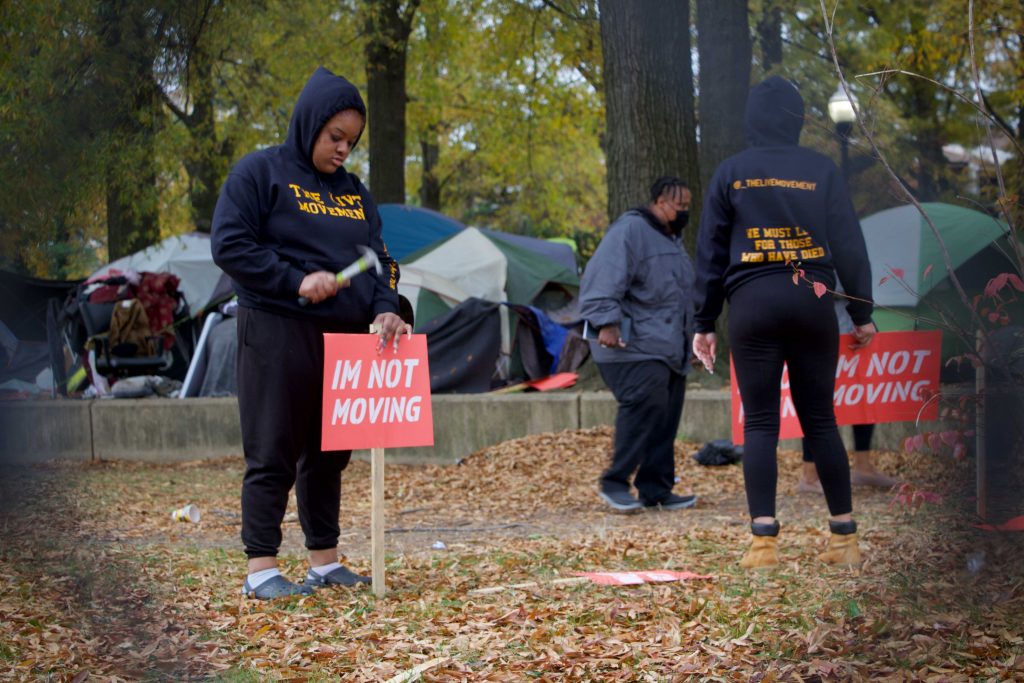 Though many of the encampment’s residents decided to leave, some chose to hold their ground. (Hannah Schoenbaum | Medill News Service)